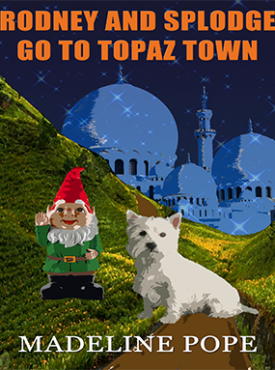 Rodney is a scruffy little Westie dog who lives with his owner, Florence. One cosy evening watching television together, Rodney finds out that Florence has always wanted a diamond ring.

That same night, he meets Splodge the magical gnome in his own back garden. Rodney discovers that there is a magic portal inside of his favourite bush, which leads to an enchanting world called The Magical Realm. Splodge can’t magic up gemstones, but he knows of a tournament in Topaz Town where the prize is a huge diamond!

Topaz Town is not as Rodney had expected, with the citizens living in poverty under the reign of their cruel leader, King Marquise. The two friends embark on an adventure to win the diamond prize. But winning a tournament is difficult with fierce opposition from the evil witch, Hexyl, and the king’s selfish attitude.

Can Rodney and Splodge win the elusive diamond and free the citizens of Topaz Town from a life of misery?

Sometimes all it takes to save the day is two good friends, a bit of magic, and the best intentions.